Cosmicflows: Recovering the Structure and Dynamics of the Local Universe

To explore the Large Scale Structures of the Universe, precise 3-dimensional information on the spatial distribution of galaxies and their velocities is required. There are several methods to measure the line-of-sight distance of a galaxy. The uncertainties on distance measurement depends on the applied method and it increases with distance. On the other hand, the measured radial velocity of galaxies are deviated from the global Hubble expansion due to the local gravitational instabilities. In the Local Universe, the contribution of the cosmic expansion is usually large compared to peculiar velocity of galaxies. Therefore, it is important to increase the spatial number density and homogeneity of the cataloged galaxies with measured distances to improve the peculiar velocity measurements. In this study, our focus is on the correlation between rotation rate and absolute luminosity of the spiral galaxies, known as Tully-Fisher Relation (TFR). In this project, I am compiling the next generation of Cosmicflows distances (Cosmicflows-4) that consists of ~35,000 galaxies with accurately measured distances. This is the most complete distance catalog of galaxies by far. Then with the aid of our team members, I am using this catalog to measure the local flows of local galaxies, using which we are carefully mapping the underlying structures, like voids and over-dense structures. Providing such a high quality big catalog of galaxy distances increases the resolution of all previous maps, with covering more regions for which we did not have any previous data, and it extends our maps far beyond any other studies so far. This ambitious project tries to deepen our vision to our local Universe far beyond our home supercluster: Laniakea. Surprisingly, regarding the visualization products of this project (videos, maps and graphs), there is only minor differentiation between what we publish in scientific journals and what is created for public consumptions. 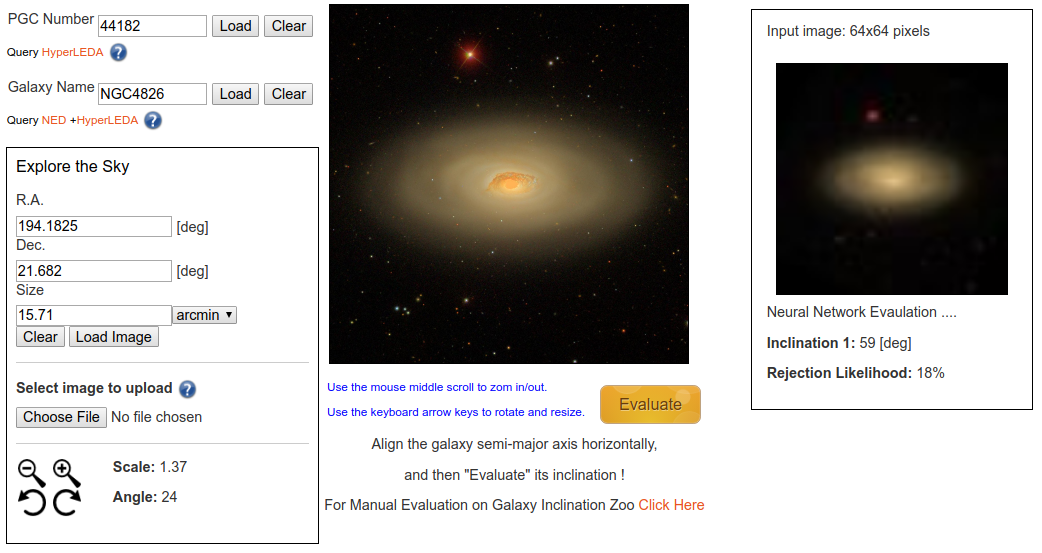 Overview
The main objective of this program is to measure the inclination of a set spiral galaxies by comparing them with a number of standard galaxies. At each step, there is only one target galaxy which is displayed in a yellow panel. The inclinations of the other galaxies are known. All the standard galaxies are ordered based on their inclinations from left to right, with left galaxies having lower inclinations. User can only move the target galaxy using either the controlling left/right arrow buttons, or other methods, e.g. dragging the target panel from the middle row and replace it, or using 'A' and 'D' keys on keyboard.
To estimate the inclination of each galaxy, user goes through two steps at most. In step A, the difference in the inclination of standard galaxies is 5 degrees. Once user narrows down the approximate location of the galaxy, (s)he has the chance to increase the measurement accuracy in step B, where the inclinations are 1 degree apart. Therefore, at the end we expect users to estimate the inclination of an unknown galaxy with the accuracy of ~1 degree. Inclinations smaller than 45 degrees (i.e. galaxies more face-on than 45 degrees) would be rejected and flagged automatically and they would not be used for the distance measurement analysis. ​
The Milky Way is moving through space because of hidden void